Nate Terry with Trekkervans came to us with intent to start a camper van rental business in the San Francisco Bay area and looking for a van conversion company.

Here is what Nate had to say about Pinnacle Campers, “I think the vans turned out awesome. The design requirements for these vans were to provide the most functionality with the fewest limitations, in a simple, robust, and user-friendly package.”

Nate wanted to develop a brand with a proprietary layout design, look and feel. Nate, having a background in adventure travel, and engineering, had a pretty good idea what he wanted the layout to achieve, it was up to us to figure out how to make it all work and deliver on the promise.

We started out with the Ford Transit short wheel base 2wd passenger vans. The reasons for this were dependability and simplicity driven. Not having to finish off van walls or install windows resulted in lower overall cost and time to build. Having an OEM (original equipment manufacturer) 2nd row removable seat was also a requirement. This option could have been found in the Mercedes Crew van at the time but lack of used vehicle availability and lack available reasonably priced service departments regionally helped lead us to the use of the Ford Transit passenger van. As a rental, the 2nd row seat will be in or out depending on customer requirements.

In short, the layout includes a full XL bed, a dinette, a drawer refrigerator, and a small kitchen cabinet with removable fresh/grey water containers under a hand pumped sink faucet.

The layout is very simple by design and is much influenced by the VW Wolfsberg weekender  Hard-top Wolfsburg Edition Vanagon or the later Vanagon Carat (without the wonky rear facing passenger seats) that have been so popular throughout our lives.

For cabinet construction and finish I felt Nate was siding on laminate/melamine. It is the cabinet fabrication material most commonly used in the camper van conversion business world wide, but I couldn’t get behind it. I have never thought wood or laminated wood in the mobile environment was a good idea. That is why I started my first campervan conversion with steel tubing.                                                                                All of the locally available laminated sheet goods have particle board cores, which is a horrible substrate in mobile or high humidity environments where strength is a requirement. If you want a Baltic birch or “marine grade” type of plywood substrate we have to laminate them ourselves. Because of the nature of the box construction and curved panels, some panels would have to be laminated before hand and others afterwards, a lot of tedious yet precise labor.
Besides, rounded corners and laminate don’t mix so you have a lot of sharp edges and corners everywhere. Additionally I just don’t think laminate has any “high use rate” durability.  We did however use laminate on the table and counter tops. These pieces required smooth surfaces, besides they are non structural and easily replaceable. We used t-slot vinyl edge molding for both which is another industry standard answer to an inexpensive high durability edge treatment.
Nate had mentioned that he wanted a surface, in and out, that can be scrubbed if something spills in one of the storage boxes. This would be one of laminates demises, spill something in the box, or have a flood, it gets in the cracks, expands the wood, laminate buckles, etc., So what to do? We used a very durable 2 part epoxy with a slight texture. It comes in any color you can imagine. The finish  looks a bit like the molded interior plastics of the Ford passenger van, hides construction imperfections without laborious sanding and completely seals the wood. You could make a ice chest or a sink out of the epoxied boxes (and maybe we will someday).
Things like the counter top being cut into the window recess of the sliding door, or the table top offsetting onto the interior panel are all things that are very difficult to model in the virtual world, these details can really only be found by spending lots of time in the van and using template making skills. The dinette table offset adds a lot of stability to itself and also gained us much needed space for a body to move between the kitchen box and the table end which wasn’t apparent on the CAD model.
We debated flip up, pullout, flip down and every other type of added counter space out there. The design of the box finally dictated the pullout drawer/extended counter top scenario.

The Dometic refrigerator is a simple drawer style, 12 volt, it was chosen for its compactness and low electrical usage. 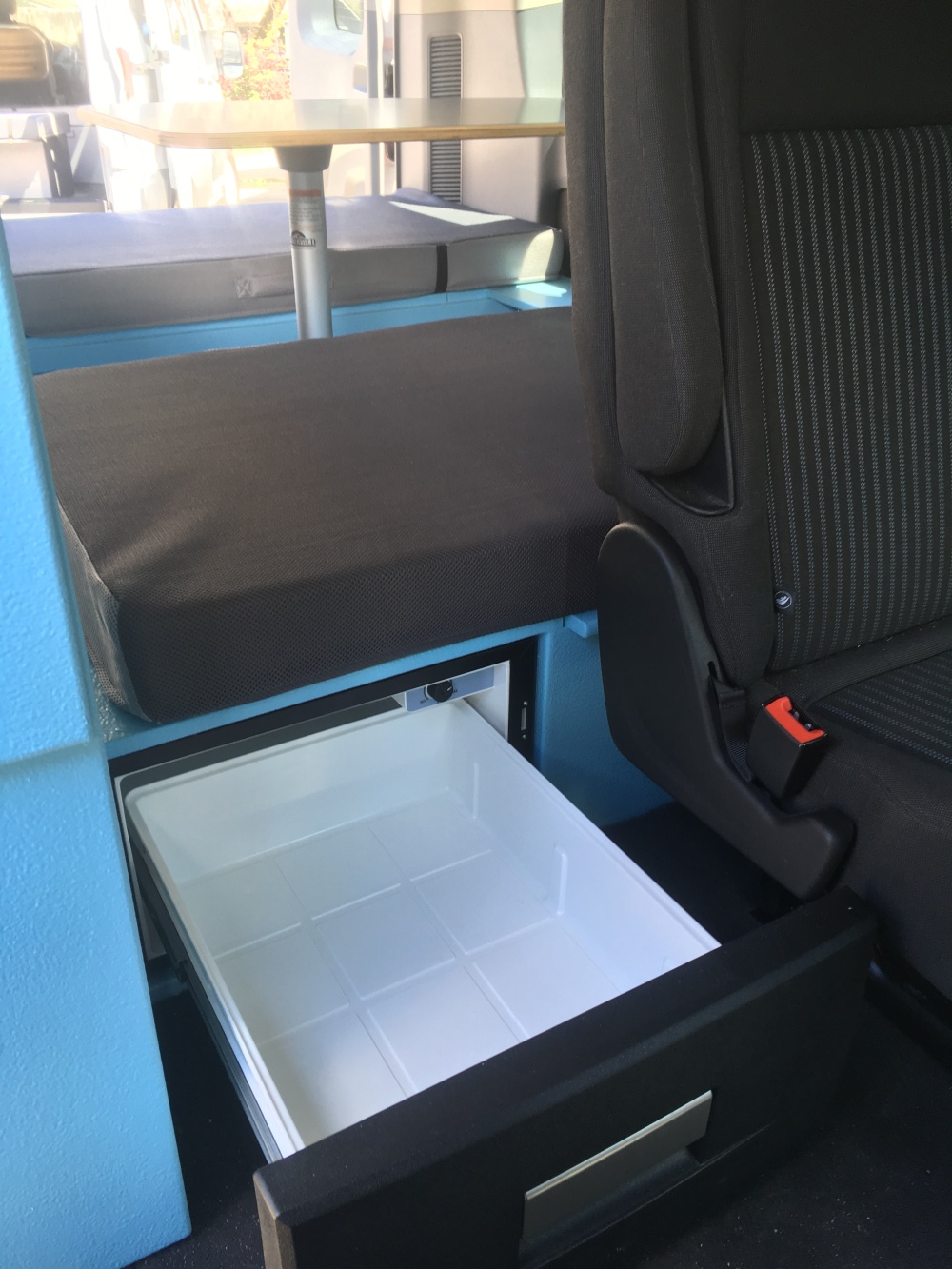 As mentioned previously the fresh and grey water  tanks are removable.
The forward tank is the fresh water, it is equipped with a pickup tube and a line running to the manual pump faucet
The supply line has a quick disconnect fitting on a 3/8″ diameter hose. The rearward tank is for the grey water, the original cap was over bored for a flexible bilge pump hose. The hose fits over the sink drain (loosely). Its all very, very simple.
The containers are easy for renters, and employees of the company alike to remove and replace, wash/disinfect, fill/drain using any method, and cheap, case closed.                          The hand pump decision was a surprise move on Nate’s part. I could have gone either way but I also made a really good case for why it should be a hand pump. Less chance of an interior flood, less electrical usage, less expensive, and less chance of an interior flood. When pressurized plumbing systems spring a leak, they flood your van.

I put some miles on the vans after up fitting, running errands, up to the ski hill, etc. There isn’t a bunch of new squeaks and rattles. Additionally after handling many of the 3 other bench seats that are now removed from the van for the conversion I really don’t think we added any additional weight over the “as built” van. In addition to that the storage boxes being horizontal and used as bench/storage keeps the weight low. Lower center of gravity is safer, more efficient and easier on the base vehicle.

We think the results did hit the nail on the head (as we always do). Here is what one renter had to say.

“We probably weren’t the average rental customers as we’re friends with the owners and used the van as a mobile base in the paddock at Sonoma Raceway for a 24 Hours of Lemons race. Not the typical beach camping or National Park trip goers, but still, it was great! It was clear that a lot of thought and care went into creating the interior modules. I was impressed too that all our gear for a family of 3 camping at a racetrack fit in the cubby holes without much clutter during the drive, which is great for ease of travel.”

In conclusion, building this fleet of vans as well as the constant feedback we get from Trekkervans has given us the experience to give our clients a greater value in their projects. What can we build for you?